WASHINGTON: Just three weeks before a presidential election that could well decide his fate as Defense Secretary, Mark Esper delivered what amounted to a victory lap this afternoon, recounting successes in fixing the deep readiness hole the military had fallen into.

Beginning in 2017 under then-Secretary Jim Mattis, DoD started to invest more money in rebuilding its training and readiness accounts and has succeeded in some measurable ways. But with budgets expected to stay flat for the foreseeable future under either a Trump or Biden administration, the balance between readiness and critical modernization needs will be precarious.

Esper said that, thanks to increased training, 52% of units across the military can now generate more combat power during the opening phases of a conflict than could do so in 2017, a major concern under congressionally-mandated sequestration.

He also mentioned the uptick in readiness rates of the F/A18 Hornet, which went from 55% to at least 80% in the last year. To maintain that trajectory, “I would like to see 3% to 5% real growth [in annual defense budgets] in order to stay ahead of our competitors, particularly China,” he added. 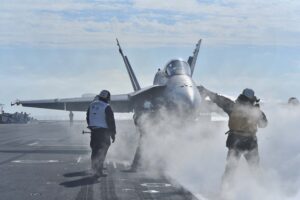 Esper has been calling for that growth since at least the start of this year, while acknowledging it is unlikely to happen. Back in February, he said the DoD needed bigger budgets, but “in the years ahead we have to brace ourselves that, at best, defense spending will be level.”

With the ballooning national debt driven by the COVID-19 pandemic, there’s little indication that defense spending will increase. Recently, Esper and the Navy Secretary have confirmed that a planned increase in the shipbuilding budget would come from savings found in other parts of the Navy budget.

Esper has spent much of the last several weeks on trips to Africa and bases across the US. While he has brought reporters with him on those trips he has declined to speak to them on the record, and has not taken a question from the press since the July 29 announcement of the planned withdrawal of 12,000 US troops from Germany, which highlighted the distance between the Pentagon’s leadership and President Trump when the president completely contradicted the military’s stated reasons for moving troops from Germany.

Esper also delivered pre-taped remarks at the annual AUSA conference this morning, but only used 12 of his allotted 30 minutes to deliver a speech that celebrated progress, while offering little new. There was no moderator, and he took no questions.

The silence is likely engineered in an attempt to keep the secretary from being sucked further into messy election-season political battles and keep him from answering questions about using active duty troops to quell demonstrations, and election day security.

Earlier this week, Democratic Reps. Elissa Slotkin and Mikie Sherrill told reporters that Esper was often evasive in written answers to questions they submitted on keeping the military out of politics, and the role the armed forces could play in a peaceful transition of power.

Chairman of the Joint Chiefs Gen. Mark Milley has pledged the military will have “no role” in the coming election. Slotkin, a former Pentagon official, said “we heard no such thing from Secretary Esper.”

Sherrill, a retired Navy officer, added Esper “did not give us the sense that we could believe that he understood that this was such a critical time.”

After walking alongside Trump across Lafayette Park for a photo op at St. John’s Episcopal Church during the height of protests around the White House in June, both Esper and Milley have been under increased scrutiny to ensure the military stay out of domestic politics. Esper has also been the subject of President Trump’s public mockery, having referred to him as “Yesper,” a nickname some in the Pentagon have given Esper for his perceived unwillingness to challenge the president.

Today’s event at Heritage, and one last week at CSBA were hosted by friendly moderators who formulated questions tightly focused on readiness and the forthcoming Navy shipbuilding plan, respectively.